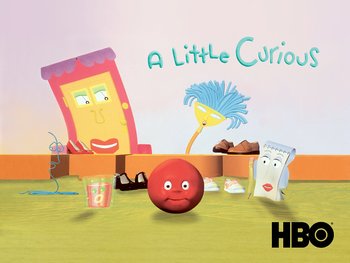 Today, we're a little curious about tropes, idioms and TV!

A Little Curious is an animated edutainment show running from 1999 to 2000 on HBO Family. The series centers on a group of household objects discovering and exploring all the amazing aspects of the world around them.

Episodes usually focused on three simple subjects that interweave with each other. Our cast of colorful characters includes:

The show is unique in that it boasts a wide variety of animation styles. Stop-motion, claymation, hand drawn, CGI. You name it, A Little Curious did it. Live-action is also utilized, whether with or without the characters.

While only two seasons were produced, the show has been airing reruns non-stop for over a decade (though this can be attributed to HBO's general neglect of their family-oriented programming). Not bad for a preschool show of this scope.

A Little Curious features examples of: