Film / What Ever Happened to Baby Jane? 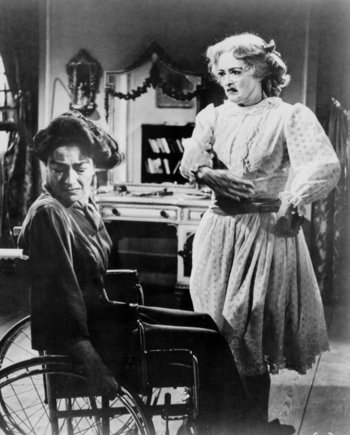 Aging sisters Blanche (Crawford) and "Baby" Jane Hudson (Davis) live together in a decaying mansion in Hollywood. Jane had been a vaudeville child star in the 1910s, but her fame disappeared a long time ago. Blanche, meanwhile, was a successful film actress in the '30s, but was crippled in a mysterious car accident involving Jane.

Jane is mentally disturbed, an alcoholic, and greatly resents Blanche. When she learns that Blanche plans to sell the mansion and put her in a sanitarium, things really start to go downhill. Jane's mental state gradually worsens, and she becomes emotionally and physically abusive to her sister, eventually holding her hostage.

Followed two years later by a Spiritual Successor, Hush... Hush, Sweet Charlotte, also directed by Aldrich and starring Davis, but with Olivia de Havilland in the Crawford part. Aldrich dipped into the genre a third time in 1969 by producing (though not directing) What Ever Happened To Aunt Alice, starring Geraldine Page and Ruth Gordon. Baby Jane itself was remade in 1991 as a Made-for-TV Movie, starring real-life sisters Lynn and Vanessa Redgrave as Jane and Blanche. It doesn't seem to have been poorly received by critics, but it didn't make much of an impression either.

The making of the original film was dramatized in the 2017 FX anthology series Feud, with Jessica Lange as Joan Crawford and Susan Sarandon as Bette Davis.

Jane Hudson: You mean all this time, we could have been friends?