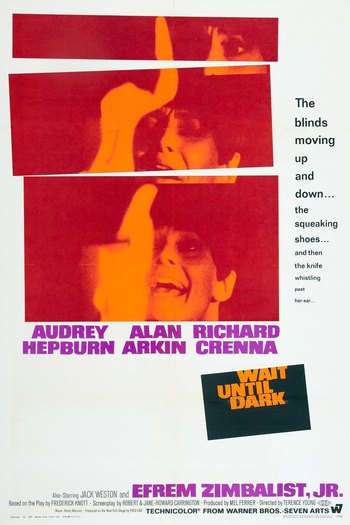 Wait Until Dark is a mystery/thriller play by Frederick Knott.

The heroine is the recently-blinded Susy Hendrix, a Greenwich Village housewife who becomes the target of three men searching for the heroin hidden inside a porcelain doll, which her husband Sam brought over from Canada — unaware of its contents — as a favor to a woman who since has been murdered. The trio, led by a sociopath calling himself Roat, try to convince Susy that Sam has been implicated in the crime and the only way to protect him is to surrender the doll. More murder and mayhem ensue when she refuses.

Originally produced on Broadway in 1966, with a cast that included Lee Remick as Susy and Robert Duvall as Roat. The play was revived on Broadway in 1998, with a cast including Marisa Tomei as Susy, Quentin Tarantino as Roat, and Stephen Lang as Mike Talman. Another revival, staged in October 2013 at the Geffen Playhouse in Los Angeles, moved the setting back to 1944, giving it a distinctly Film Noir flavor among other changes.

A film adaptation was made in 1967, produced by Mel Ferrer, directed by Terence Young, and starring Audrey Hepburn as Susy, Alan Arkin as Roat, Richard Crenna as Talman, and Efrem Zimbalist Jr. as Sam. Another film adaptation, titled Penthouse North and starring Michelle Monaghan and Michael Keaton, was released in 2014.