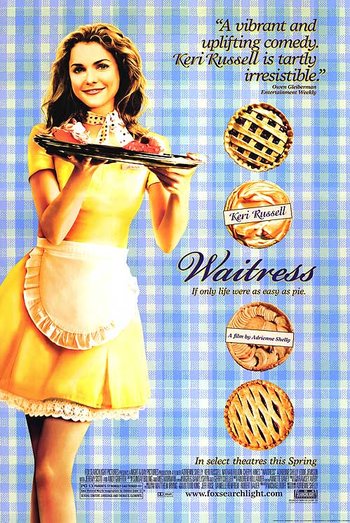 If only life were easy as pie...
Advertisement:

Waitress is a 2007 dramedy about Jenna, an unhappily married waitress/pie-baking-genius from the deep south. When she discovers she is pregnant by her abusive and domineering husband with no other choice but to keep the unwanted baby, she begins a passionate affair with her new (and very much married) gynecologist. The film follows her small steps towards self-actualization, independence, and happiness, while being supported by the staff and customers of the diner she works in and their own stories.

Directed by Adrienne Shelly, whose shockingly random murder overshadowed the mostly positive reviews of the film, it stars Keri Russell as Jenna, Jeremy Sisto as her husband Earl, Nathan Fillion as the gynecologist Dr. Pomatter, Cheryl Hines as her promiscuous friend Becky, and Andy Griffith as Joe, the diner's owner.

Not to be confused with the 1981 Troma "sexy comedy" Waitress!.

As of April 24, 2016, there is now a musical version on Broadway with music by Sara Bareilles and a book by Jessie Nelson, starring Jessie Mueller as Jenna Hunterson.