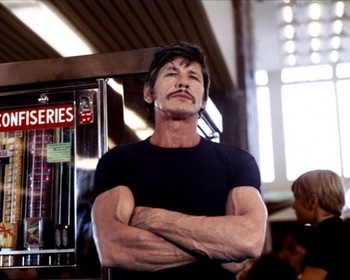 "They took his family, he took revenge."
Advertisement:

Joe Martin (Bronson) is a soldier who was arrested for striking an officer. He escapes along with three others and the assistance of an Ax-Crazy mercenary from the outside. After the mercenary kills a cop who noticed their escape, Joe realizes that he's in danger, and escapes with the getaway car, leaving the rest to be arrested.

It's been seven years since that day, and Joe now owns a charter fishing service, and has a loving wife and (step-)daughter. The other escapees have gotten out of prison, and have hunted Joe down. Now, they have his family and want him to help them with a drug trafficking job.

Alternative Title(s): From The Boys