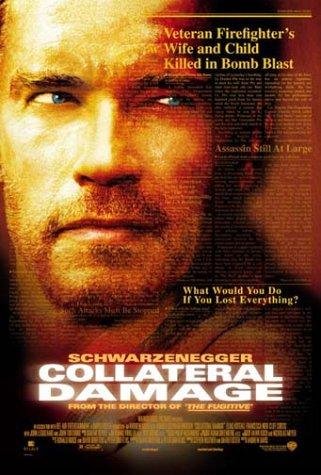 El Lobo: The fireman, huh?
Gordon Brewer: The coward who kills women and children.
El Lobo: You Americans are so naive. You see a peasant with a gun on the news, you change channels. But you never ask, "Why does a peasant need a gun?" Why? You think you're the only ones who can fight for independence?
Gordon Brewer: Independence to do what? Kill my wife and son?
Advertisement:

Collateral Damage is an action thriller from 2002, directed by Andrew Davis and starring Arnold Schwarzenegger.

After his family is killed in an explosion caused by Colombian terrorist El Lobo (Cliff Curtis), Los Angeles fireman Gordon Brewer sets out to get him.