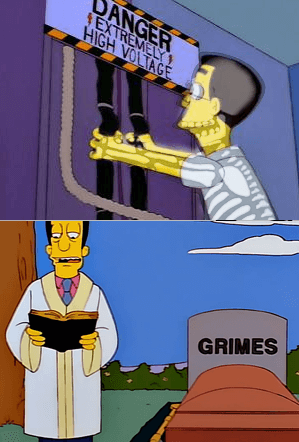 "His death came as a great shock to all of us..."
"An absolutely electrifying experience."
— James Bond, Death Is Forever
Advertisement:

There are many ways to kill off a character, but ever since Thomas Edison invented the electric chair, creators have learned that a particularly flashy way to do it has been to run a high voltage current through them. The circumstances may vary, the character may take a nasty fall into some high voltage equipment, grab an electric fence, or wires, or their death may be something more mundane like dropping a toaster into the tub. The fact is a lot of characters get a nasty shock, and they die, and there's a million ways to do that.

There are a couple of different reasons a character might die by electrocution. The main reason is it's a very "clean" way for creators to kill a character off without having to resort to Bloodless Carnage or Symbolic Blood. Thus a High Voltage Death is often used when creators want to get around the censors in a more realistic way; especially in kids shows. The other reason is it's also very easy to write a High Voltage Death as an accident, which makes for a great Karmic Death. One reason to accidentally die by electrocution is for it be an Accidental Murder where the "killer" only intended to rough them up a bit, but one thing leads to another, and the "victim" ends up turning on the power and unintentionally killing themselves. Or the electrified character ends up being oblivious to the fact that electricity was running through the thing that ends up killing them. Despite all this, dying by electrocution can often be a more painful and horrifying way to die than more graphic ways.

Strangely, it's pretty rare for a High Voltage Death to be caused by Elemental Powers, since there are so many other ways to die by electricity. Killing someone intentionally with electric powers is usually a privilege reserved for the most evil of villains, because of how horrifying it looks, and how painful killing someone with high voltage can be. You could say it's a twist saved for when you really want to shock the audience.

This is a death trope so spoilers will be unmarked.

The polar opposite to Harmless Electrocution. Related to Accidental Murder, Bolt of Divine Retribution, Karmic Death, and Make It Look Like an Accident. Electrified Bathtub is a subtrope. In more comical instances can lead to X-Ray Sparks. For cases where electricity is not harmless, but doesn't cause death either, see Electric Torture.

Of course, this can unfortunately be Truth in Television for anyone who messes around with electricity without knowing what they're doing — or for that matter anyone who gets sentenced to death by electric chair — so please don't do that!

Larry can attempt to climb a fence, blatantly ignoring the high-voltage signs on it, but that results in a game over.

Larry can attempt to climb a fence, blatantly ignoring the high-voltage signs on it, but that results in a game over.