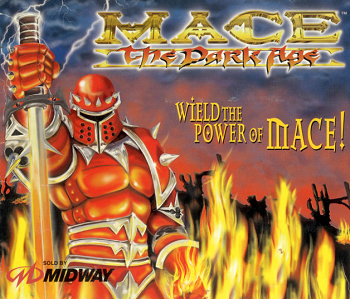 Mace: The Dark Age (1997) was the Western Fighting Game response to Soul Edge, except much darker and gorier. Made by Atari and published by Midway, it has a small cult following.

The world as we know it in this one is a complete Crapsack World, Europe is in a permanent dark age as petty warlords bide for power through war and oppression, Arabia under the cruel grasp of the Assassin's Guild and the Far East is about to witness the destruction brought upon Europe and Arabia. And God is seemingly unable to save the world from suffering or cleanse the world and start over.

The reason the world is such as terrible place is due to seven men known as the Covenant of Seven who made a Deal with the Devil who has the Mace of Tanis. At the cost of their sanity they are given near eternal life and the power of a demon and in exchange is expected to do evil thing in his name. The recent chain of events made Asia the next target of the warlords who seek the powers.

Unfortunately however the warlords from the ravaged lands of Europe and Arabia want more power, dispatch their best warriors to kill Asmodeus and steal his power. Leaders from the East sense Asmodeus' plottings and strive to destroy him before it's too late. Heirs to kingdoms long since vanquished seek revenge on Asmodeus and those who wield the dark energy. They are the fiercest fighters on Earth, and they all have one thing in common: they each must possess the Mace.

Tropes of Mace: The Dark Age: