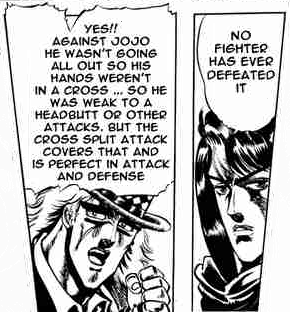 Oftentimes you'll have Combat Commentators.
Riza: Since you'll be the only one not participating in the battle, you have to give an excruciatingly detailed play-by-play of what's going on, as if you were describing it to a bunch of idiots.
Winry: You've got to be kidding.
— Pokémists, Pocket Alchemists

Where active conflict between characters plays a major role, the combat commentator is the character who's seen most of the moves before and is kind enough to provide a running commentary for the less-seasoned characters (and, by extension, the audience) as to who has just done what, and why they've done it. Sometimes the character takes the role of an actual commentator or sports announcer, complete with microphone.

Obviously, this works best in a martial arts-based series, where the commentator may well know not only the names and effects of a move, but the history of them as well. However, it can just as easily appear in any other type of series with a competitive bent.

Who commentates may well change over the course of the series, such as in Initial D, where the commentators tend to be replaced by more skilled counterparts as the level of Takumi (and later Project D) continue increasing.

Near-obligatory for a Tournament Arc. Often make use of Talking Is a Free Action, allowing commentators to provide a thorough, detailed explanation of the effects, drawbacks, and origins of a move within the two or so seconds it takes to execute. When a character acts as their own Combat Commentator, even when it serves no purpose except to help their opponent, that's Explaining Your Power to the Enemy.