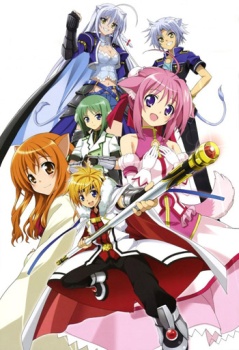 "This is a tale of heroes and princesses, of ears and tails, of hopes and dreams!"
Advertisement:

The Republic of Biscotti and the Kingdom of Galette are at war, a literal battle of cats and dogs. Biscotti needs to tip the odds in their favor, and so they decide to summon a hero. That hero turns out to be 13-year-old Japanese-British middle-school student Cinque Izumi. While trying to cut class and practice for an upcoming athletic meet, Cinque ends up somersaulting into a magic portal that takes him to the magical land of Flognarde, where he is the hero. Now he has to learn to be one.

Oh, and don't worry. It turns out that battles on Flonyard are completely nonlethal. The worst that generally happens is a loss of clothing, or getting turned into a cute little bouncing ball of fluff if you're actually wounded. In fact, war to them is literally more of an intense sporting competition, something that a kid like Cinque excels at.

Dog Days is an Anime First series by Seven Arcs, better known for their work on the Lyrical Nanoha series, which first debuted as part of the Spring 2011 Anime lineup.

The season was followed exactly a year later by Dog Days' (Dash). Cinque returns to Flonyard, this time bringing Rebecca Anderson, his only contact to Earth throughout the first season, and Nanami Takatsuki, his cousin (who was summoned by Galette). A complication arises when the Duchy of Pastillage (squirrel-people, if you must know) decides to turn the Biscotti-Galette war games into a three-way tussle, taking Rebecca as their own Heroine.

A third season, Dog Days'' (Double Dash), aired as part of the Winter 2015 lineup. Cinque, Nanami and Rebecca are called once again to participate in the war games, but these would have to wait when a freak thunderbolt that put the former two's trajectories off-course lands them in the great Dragon Forest beyond the three realms, where they learn from its horse-girl oracle Sharu of a concentration of demons threatening to destabilize Flonyard.

American viewers were able to legally watch the first two seasons on Crunchyroll until its delisting in 2021.

Not to be confused with the Kane & Lynch sequel. Or with Dog Day Afternoon. Or with Diary of a Wimpy Kid: Dog Days.

Tropes in Dog Days include: