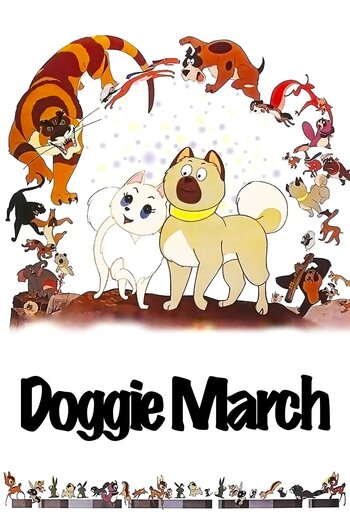 Created by Toei Animation in 1963 and very loosely based on the story of The 47 Ronin, Doggie March is about a puppy named Rock, whose mother is killed by an evil tiger named Killer and a fox named Akamimi. After his friends manage to get him to an alley (where they assume he will be safe from Killer), Rock forms an army of dogs to get revenge on the villains, who are now plotting to find and kill him.
Advertisement:

Notable for its more wacky style of animation, the film has never been dubbed into English, and seems to have fallen into obscurity. It does have one claim to fame however. It was the first movie that was worked on by an obscure artist named Hayao Miyazaki! Fans of Toei may also recognize Rabi the Rabbit, whose design came from The Little Prince and the Eight-Headed Dragon.