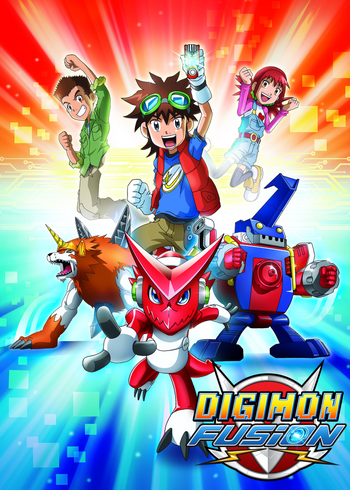 I just can't turn my back on them!
Advertisement:

Digimon Fusion (Xros Wars in Japan, pronounced "Cross Wars") is the sixth anime series in the Digimon franchise, coming three years after the end of Digimon Data Squad. In many respects, it seems to be a throwback to its predecessors — the animation is reminiscent of the Digimon Adventure style, Chika Sakamoto returns to voice lead partner Shoutmon, a Greymon plays a significant role again, and the goggles are back — and yet in so many ways the series is significantly set apart from earlier Digimon iterations in concept.

Fusion is the story of child prodigy and good Samaritan Taiki Kudo, who one day follows the dying voice of Shoutmon. His X Loader Digivice appears and, along with childhood friend Akari Hinomoto and "eternal rival" Zenjiro Tsurugi, they are sucked into the Digital World. The world-conquering Bagra Empire's army attacks the trio and the healed up Shoutmon joins in the fight. Together with his partners, the silent and loyal Ballistamon and the naive and star-dazzled Starmon and Pickmons, they defeat the army. However, the commander of the army MadLeomon absorbs the data of his subordinates and endangers Shoutmon and Ballistamon. When Taiki comes to the rescue him, Shoutmon and Ballistamon DigiXros together and put down MadLeomon, whose superior forces him and his remaining troops to retreat.

With the lone wolf Dorulumon and his young charge Cutemon later joining them, "Xros Heart" is set for victory. Also opposing them as they fight the Bagra Empire is team "Blue Flare", consisting of the calculating Kiriha Aonuma and his partners Greymon and MailBirdramon. Filling the motivationally ambiguous slot is team "Twilight", consisting of the mysterious Nene Amano and her allies Monitamon, Sparrowmon, and DarkKnightmon.

Xros Heart proved its worth and was successful in its quest, collecting all the Code Crowns and causing the Zones to reunite. However, Bagramon intervened and cast Taiki, Akari, Zenjiro and Shoutmon back to the real world, conquering the Digital World while they were gone and transforming it into a twisted empire of his designs. When Taiki and Shoutmon returned to the Digital World at the beginning of the second half of the series (Digimon Xros Wars: The Evil Death Generals And The Seven Kingdoms), they found themselves tasked with taking on this rearranged digital empire and defeating the Seven Death Generals, its brutal governors. Kiriha and Nene allied with Taiki in his campaign, and their combined strength, tactical prowess and bonds of friendship proved to be more than a match for Bagramon's forces. The series got the green light for a third arcnote Although many mistakenly believe it to be its own season and a sequel, according to Toei and the staff involved, it isn't which is called Digimon Xros Wars: The Young Hunters Who Leapt Through Time. This makes this season the longest anime installment of the Digimon franchise.

The full series is (legally) available subbed through Crunchyroll here.

See also: the Digimon Xros Wars manga, an adaptation of the anime with significant differences and deviations.

Compare to many Super Robot series in style.