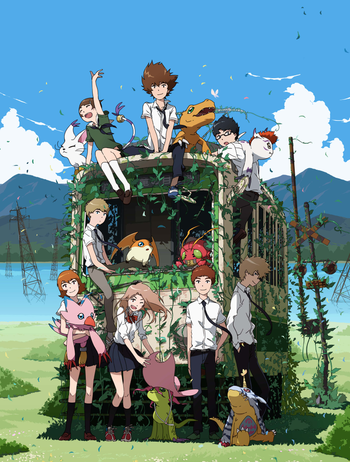 The adventure now Digivolves once again.

"I encountered you.
This world has chosen the reality and the future which shouldn't have been chosen.
That's why I am here."
— Taichi "Tai" Yagami, 1st promotional video

,) which used to only consist of a trailer. If you skipped the trailer, clicked on the eggs, and enough nade-nadenote clicks of a special "Digi-Egg" were applied, they would eventually hatch and more information would be released.

Advertisement:
The series can be viewed on Hulu (the listing

) and on Crunchyroll (the listing).

) demonstrating to viewers the children's new Japanese voices and more aspects of the story.

The character art style is directed by Atsuya Uki of Cencoroll fame.

, and in October for across the country.

A live stage play companion to the series, Super Evolution Stage Digimon Adventure Tri. ~The Adventure of August 1st~, ran at the Zepp Blue Theater Roppongi in Tokyo for ten performances from August 5-13, 2017.