Animation / Cubix: Robots for Everyone 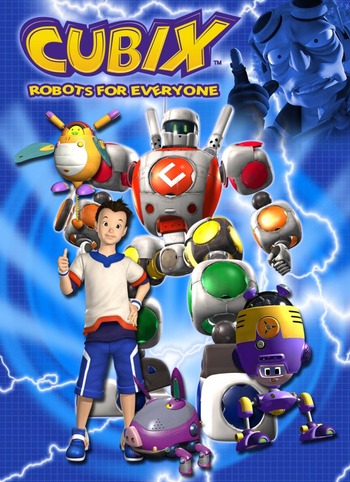 ♪ Robots for Everyone! ♪
Cubix: Robots For Everyone (2001) was a short-lived Korean All-CGI Cartoon, set in the future not so far away where robots capable of emotions and independent thought are commonplace.
Advertisement:

The plot revolves around a boy named Connor and his Robot Buddy Cubix, a Super Prototype made of modular blocks who can transform into a number of useful forms. Along with his friends from the local robot repair shop (the "Botties"), Connor and Cubix battle the evil Dr. K as he tries to collect a mysterious substance called Solex that's causing robots to go berserk.

The series was commissioned, licensed and dubbed by 4Kids Entertainment and was animated by Korean animation studios Cinepix and Dai Won.

4kids worked together with Cinepix to produce the show. As such the Korean version came first and the English version was based upon it, with several scenes featuring new animation being created solely for the English version. For example, more scenes were added into the first episode showing the Botties warming up to Connor as he works on Cubix.

Other international dubs are based on the English dub with the exception of the Japanese dub (commissioned and produced by Xebec) which borrows elements from both the English and Korean version for its own unique adaptation.

Tropes specific to the English adaptation:

Tropes specific to the Japanese adaptation: