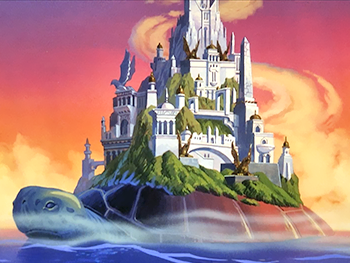 The Vanishing Isle: known for its turtle soup.
Advertisement:

Mythical creatures of mystery: fish, whales, or turtles (there's a definite preference for turtles over any other animal) big enough to be mistaken for islands or even continents have shown up in Mythology and Legends for thousands of years. If it's a turtle, the proper term is Aspidochelone. They are often portrayed as being so large and ancient that soil and plantlife have grown on its back, sometimes ancient species containing something so rare that the hero (or villain) must marvel at it or try to obtain it. Often the hero gets only a brief opportunity to marvel at its existence, before it decides to set out and dive deep underwater, leaving the protagonist high and dry (or wet and drowning if he doesn't manage to get off in time). How the fauna and flora on its back can survive and grow when it frequently dives underwater is rarely addressed.

A variant of this trope place the beast on land rather than in the sea — a Turtle Hill, so to speak. In these cases, the creature may be mistaken for a regular hill or mountain, as soil and dirt may cover its body entirely and forests or villages grow on its back, until something prompts it to move and a piece of the landscape stands up and walks away.

A Sub-Trope of That's No Moon. See also Kraken and Leviathan for other gargantuan sea creatures, with which this trope often overlaps. An Ocean of Adventure will likely host many such creatures.

If Earth is one of these, there's a good chance it's turtles all the way down. If it's a dead turtle, it's a Giant Corpse World.

Turtle Island is also a name for North America by some indigenous people, the Trope Maker. Not to be confused with the 1995 animated series.

After reading about a flying whale in the witch's newspaper, the girls head out to see it.

After reading about a flying whale in the witch's newspaper, the girls head out to see it.