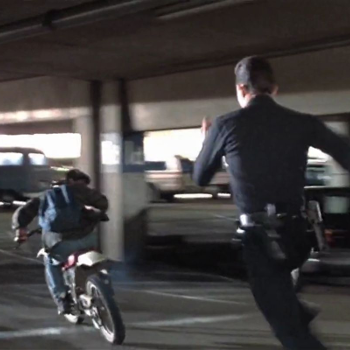 The expected usual ingredients for a car chase are at least one chaser, at least one fugitive, and at least two cars. Not this time. For one reason or another, the chaser is on foot. In Real Life, this would likely lead to quite a short chase and a cheery wave in the rear view mirror from the fugitive (unless they got in a traffic jam). In the movies, however, count on terrible gridlock, the chaser either knowing the streets really well and thus able to take shortcuts (expect some Le Parkour), being able to hitch (temporary) rides on other passing vehicles (may involve Hood Hopping and Outside Ride), or even having a Super Speed. Pursuers with Super Strength can be expected to physically stop the vehicle.

Sometimes just the lead in to a normal car chase — this trope is in play until averted by the chaser getting hold of a car of their own. May sometimes be inverted: someone on a vehicle chasing someone else on foot. In this case you may expect the chased to use shortcuts or going through crowds; Le Parkour may also be in play.

The trope title comes from the Grocery Man And Friends episode "Bob Williams, The Candy Man/Sonic the Hedgehog", where Bruna Romano blurts this out: "Bringing running shoes to a car chase. This is magical. Call Satan."