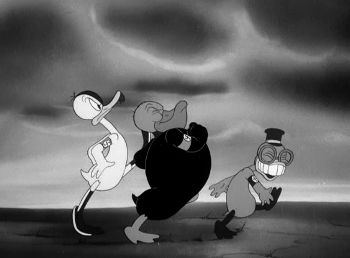 "The Ducktators" is a 1942 Wartime Cartoon released by Warner Bros. and directed by Norm McCabe, who would later direct "Tokio Jokio" (1943) too. It's notable for being a satirical allegory for World War II depicting Adolf Hitler, Benito Mussolini and Hideki Tojo (though some sources claim that the Japanese duck caricature is, in fact, Emperor Hirohito) as ducks and geese who take over a farm, while a peace dove (possibly based on U.S. President Roosevelt) feels powerless to stop them. Near the end, after being trampled in a failed attempt to end the Ducktators' reign of terror peacefully, he decides to muster up the courage to defeat them. The short ends with a propaganda message to buy more war bonds and join the army.

Since the end of World War II, it has seldom been seen on TV due to its explicit ties to the era, though the rare times it has been shown on television usually is shown edited, barring its sole appearance on Cartoon Network. As a result, it has fallen into Public Domain. It's mostly interesting for historians or people interested in wartime cartoons.

"The Ducktators" provides examples of: