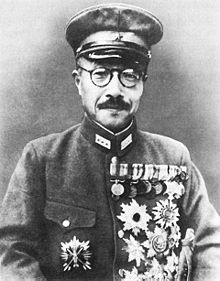 "It is natural that I should bear entire responsibility for the war in general, and, needless to say, I am prepared to do so."
Advertisement:

Perhaps one of the most feared and at the same time ridiculed men in history, General Hideki Tojo (December 30, 1884 – December 23, 1948) was the Army Minister, and subsequently Prime Minister, of Japan during most of World War II. A hardcore, militaristic ultranationalist with fascist and absolutist leanings, Tojo (partially) led the Empire of Japan during the war with China, United States and the British Empire, leading to the eventual defeat and near total destruction of the nation he loved at the hands of the Allied forces.

Born in 1884 to Hidenori Tojo, a lieutenant-general in the Imperial Japanese Army, Tojo followed his father into the military. He was well-respected as a cadet, and served in a number of increasingly senior positions, becoming Bureau Chief of the Army as a colonel in 1928, Chief of the Personnel Department in 1933 as a Major-General, and commander of the 24th Infantry Brigade in 1934. In 1935 he assumed command of the Kenpeitai of the Kwangtung Army in Manchuria, where he earned the nickname “The Razor” for his iron will, and ability to make quick decisions.

A hardline nationalist with a strong xenophobic streak, Tojo was one of a clique of officers within the IJA and IJN who sought to make Japan a great power with a powerful emperor, with or without the support of the civilian government. After being promoted to Chief of Staff of the Kwangtung Army in 1937, Tojo helped to increase Japanese penetration into Inner Mongolia, and following the Marco Polo Bridge Incident he ordered his forces into northern China. He was eventually recalled to Japan where he became first Vice-Minister of the Army, and then Inspector-General of Army Aviation.

It was in 1940, however, that Tojo entered the domestic political scene in a major way, when then-Prime Minister Prince Konoe made him the head of the Army Ministry in his second cabinet. Tojo was a strong supporter of Japan’s alliance with the other Axis powers, and used his new position to further expand the war in China, while pushing Japan closer and closer to a confrontation with Great Britain and the United States of America. When Konoe resigned as Prime Minister in 1941, Tojo was appointed Prime Minister of Japan by Emperor Hirohito, much to his own surprise. Following the breakdown of negotiations with the USA, Tojo approved both the attack on Pearl Harbor and the seizure of the "Southern Resource Area" (Indonesia and Malaya) bringing Japan into WWII in a big way. In Allied propaganda, the bespectacled and moustachioed Tojo would quickly become a target of racist caricature, and was a favourite victim of mockery, being frequently represented as a monkey or a small boy.

From 1941-1944, Tojo was the one of dominant figures in the Japanese cabinet, holding the positions of both Prime Minster and Army Minister. He was, however, unable to fully control the Army, and the various factions within it, and had no control over the Navy Ministry. As Japan’s defeats began to pile up, the other members of the imperial goverment and the army turned on Tojo, who resigned his position in 1944 after the loss of Saipan. When Japan surrendered to the United States, Tojo attempted to commit suicide, but failednote  Rather than traditional seppuku, or shooting himself in the head like Hitler did, Tojo attempted to shoot himself in the heart. Unfortunately for him, the pistol he chose was a Nambu Type-14 revolver he had received as an academy graduation gift. For all his warmongering, Tojo had never used his sidearm in combat, and didn't realize that its 8x22mm (the weakest pistol round ever to be standard-issue in any military) bullet wasn't up to the task. Despite being fired point-blank directly at his heart (using a tattoo made by his personal physician to be an indicator in the event of suicide), the bullet barely penetrated his sternum and failed to pierce his heart, and was arrested by American troops.

Following the recovery of his health, Tojo was put on trial for war crimes. During his time as Chief of Staff of the Kwangtung Army, and as Army Minister and Prime Minister, Japanese ground and naval forces had committed numerous flagrant violations of The Laws and Customs of War. Somewhere between ten and thirty million Chinese civilians were murdered by Japanese troops, with some being subjected to grisly human experimentation by Ishii Shiro’s Unit 731. Japanese troops gang raped tens of thousands of women (likely more), abducted still thousands more to serve as "comfort women"—forced into prostitution by the Japanese army and beaten and raped to death by imperial soldiers, and regularly tortured and killed Allied prisoners of war. Biological weapons, including anthrax, were "tested" on Chinese civilian populations, killing several million more. Even cannibalism was common in the Japanese military, who regarded non-Japanese as subhuman. Tojo, both as a partial leader of Japan’s armed forces, and as a partial shaper of military and foreign policy, not only refused to punish the perpetrators of such acts, but encouraged them, using Master Race propaganda, and the Imperial Cult to justify Hirohito's military dictatorship's wholesale butchery of Japan’s enemies. With a death toll in the tens of millions, Tojo's action put him in the running, alongside the likes of Idi Amin, Josef Stalin, Benito Mussolini, and Adolf Hitler, and Hirohito (for whom he worked for) for the title of "the twentieth century’s worst human being." Tojo himself seemed to realize this; following his conviction for war crimes, Tojo accepted full responsibility for all of Japan’s atrocities, apologised to the victims, and asked that the United States not do unto Japan, as Japan had done unto others. He was hanged on December 23, 1948.

In recent years there has been some discussion about whether Tojo took the fall for Emperor Hirohito, taking the blame for actions that the Emperor had in fact ordered. Given the opaque nature of the Empire of Japan’s wartime politics, and the fact that in many cases, officers like Tojo had to interpret what the Emperor wanted (an attempted coup by fanatical military hardliners in August 1945 to prevent the Emperor from ordering capitulation certainly lends some credence to the idea that he wasn't calling all the shots), there is certainly a great deal of room for error in either direction, but in the end the most reasonable conclusion seems to be that there was plenty of blame to go around, and regardless of who wanted the war, it was undoubtedly Tojo who chose to wage it in the way that he did.

See Adolf Hitler and Benito Mussolini for other Axis prime ministers (or equivalents of prime ministers). See Winston Churchill, Franklin D. Roosevelt and Chiang Kai-shek for his some of Allied enemies. See Imperial Japan, Katanas of the Rising Sun, The Second Sino-Japanese War, The Pacific War, and World War II proper for the nation he worked for, the forces he (partialy) commanded, and the wars that he got involved in.