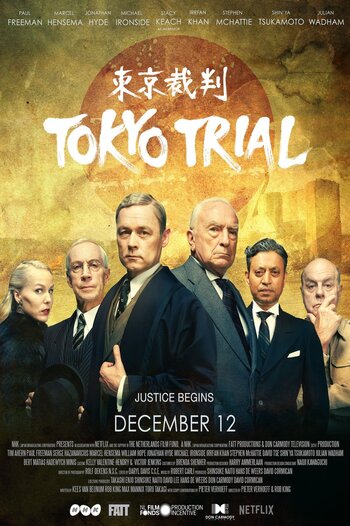 Tokyo Trial is a 2016 television miniseries, which ran for four 45-minute episodes.

It is about the International Military Tribunal for the Far East

, better known as the Tokyo War Crimes Trial or simply the Tokyo Trial. In 1946, with the Nuremberg Trial of the Nazi high command underway, a similar tribunal convenes in Tokyo to try the Japanese leadership. Former prime minister Hideki Tojo and various members of the Japanese cabinet and military leadership will be tried for war crimes, crimes against peace, and crimes against humanity.

The proceeding does not go as smoothly as the one being held in Nuremberg. The high commander in Occupied Japan, General Douglas MacArthur, refuses to let Emperor Hirohito stand trial. MacArthur wants Hirohito to help him unify Japan into a democratic (and America-friendly) state, but Judge William Webb of Australia (Jonathan Hyde), president of the tribunal, is incensed at the prospect of letting the emperor off the hook. Some of the judges, such as William Patrick of Great Britain, are only too eager to hang the Japanese leadership, but others such as Judge Röling of the Netherlands wonder if the Allies, who dropped two nukes on the Japanese, have the moral standing to judge the Japanese. Finally there is Judge Pal of India (Irrfan Khan), who rejects the entire idea of the trial as being ex post facto law, and advocates for the acquittal of all defendants.