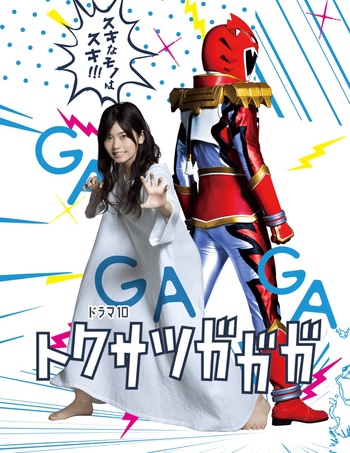 The most important things are taught by Tokusatsu!
Advertisement:

Tokusatsu GaGaGa is a Dorama based on a comedy seinen manga by Niwa Tanba and serialized in Shogakukan's Big Comic Spirits seinen manga magazine, produced and aired on NHK on Fridays as part of the Drama 10 block on January 18, 2019 until March 1, 2019.

The series follows Kano Nakamura, a seemingly ordinary office lady who is secretly a gigantic fan of tokusatsu TV series, to the point where she often imagines herself as a special effects hero in order to get through the difficulties of her daily life. Because her co-workers look down on otaku, Kano has to keep her obsession under wraps. Throughout the series, she meets similar people with the same problems of being an otaku and has to put up with her mother who doesn't like her hobby and wants her to be a lady in the traditional sense.