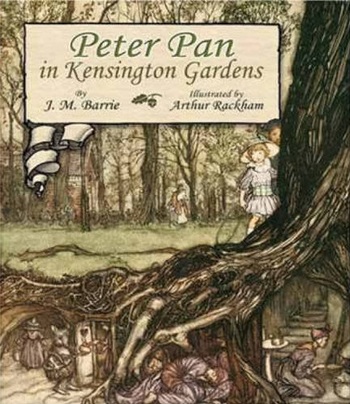 Peter Pan in Kensington Gardens is a collection of chapters first published in The Little White Bird that concern the character Peter Pan. In this story, it's revealed that all children begin life as birds until Solomon Caw sends them out to expecting mothers, where they become human children. Peter, an infant of seven days old, is still young enough that he's still half-bird and therefore has complete faith in his ability to fly. He escapes his home by flying out through the open window and arrives in Kensington Gardens. Upon realizing that he really is no longer a bird, he loses the ability to fly because once you doubt your ability to fly, you can no longer do it.
Advertisement:

This book is a sort of predecessor to Peter Pan, though there are some differences. The first, obviously, is that Peter lives in Kensington Gardens, not Never Land. Secondly, he's perpetually a baby, not a child as most of us know him to be.