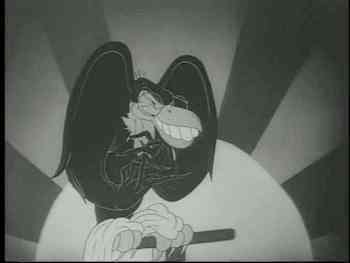 "Tokio Jokio" is a 1943 War Time Cartoon made in the Looney Tunes franchise, directed by Norm McCabe, who also directed The Ducktators (1942). It's basically an anti-Japanese propaganda vehicle, presented in the style of a Mockumentary and considered to be one of the most racist cartoons Warner Brothers ever made (though it is not a Censored Eleven cartoon. Just a Wartime Cartoon with heavy anti-Japanese sentiment). The majority of the jokes present the Japanese as ugly, stupid, weak and incompetent, while the rest are just incredibly lame puns.

Understandably, the cartoon has been banned from public broadcast and distribution in America, falling into Public Domain as a result. Nickelodeon actually did have this short in its library when it had the rights to air Warner Bros. cartoons as part of Looney Tunes on Nickelodeonnote both the Nick at Nite version and the daytime version that aired on weekends, and could have aired it, but decided not to. Meanwhile, Cartoon Network aired clips of this [with show announcer, Leslie Framm, explaining how cartoons like Tokio Jokio and others around this time were particularly cruel to the Japanese] as part of their ToonHeads special on World War II cartoonsnote the clips shown were the title card, the air raid siren gag where it's just two Japanese guys taking turns sticking themselves in the butt with a needle and screaming, and the "Japanese club sandwich" sequence.

Director Norm McCabe left Warners soon afterwards to sign up for military service (making this his final WB cartoon, and his most notorious due to how much of an Unintentional Period Piece it is, if online discussions about old cartoon shorts are anything to go by), but nevertheless decades later he saw all of his war time propaganda cartoons as an Old Shame.