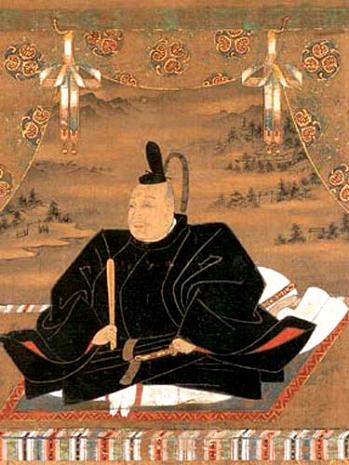 "If the cuckoo does not sing, wait until it will."
"After victory, tighten the cords of your helmet."
— Statement at the end of the battle of Sekigahara
Advertisement:

Credited as the third and final unifier of Japan during the Sengoku Period, Tokugawa Ieyasu is (naturally) the man who founded the Tokugawa shogunate, a dynasty that would control Japan for over 200 years. The Tokugawa line's control remained firm throughout this period and was not broken until the Meiji restoration in the latter half of the 19th century, and the downfall and abolition of the samurai class altogether.

Tokugawa Ieyasu had been around since the early era of Oda Nobunaga note Ieyasu was about 8.5 years younger.. Born Matsudaira Takechiyo in January 1543, his first major appearance in history is as the man who stabilized his clan's survival... by being a hostage for the Oda Clan, then the Imagawa Clan. As a hostage, Takechiyo learned quite a lot, particularly about the arts of war. He later changed his name to Matsudaira Motonobu, and later still, Motoyasu.

As Motoyasu, he began his military career in 1558, winning a minor victory over Oda Nobunaga at Terabe. In 1560, Imagawa Yoshimoto began marching towards Kyoto but fell victim to a surprise attack by Nobunaga at Okehazama. Motoyasu declared independence from the Imagawa clan soon after, allied himself with Nobunaga, and proceeded to strengthen his home base of Mikawa. He acquired a number of powerful and famous generals, including Hattori Hanzo and Honda Tadakatsu, then in 1566 changed his name to Tokugawa Ieyasu.

Ieyasu proved to be something of a 'Sidekick' or 'rear-guard' for Nobunaga, and key success to his campaign: Since they're allies, Nobunaga could march to the capital with ease when he's assured that Ieyasu would watch his back. Eventually, as Nobunaga was killed by Akechi Mitsuhide, Ieyasu escaped with his life and planned revenge, but he was beaten to a punch by Toyotomi Hideyoshi. After a bit of a stalemate, they made peace and Ieyasu once again bid his time, by deciding to just demote himself to become a vassal of Toyotomi.

When Hideyoshi passed away and his reputation broke due to the ill-fated Korean Campaign, Ieyasu rose as one of the main people in the position to rule Japan for several reasons:

Still, Ieyasu was not without his opposition; despite all of Hideyoshi's flaws as listed above, some were still adamant in giving him merits for unifying Japan on his own, if it wasn't for Hideyoshi, they'd still be fighting each other instead of being united; Ieyasu was accused as an opportunistic usurper, his wisdom of not sending his men to the Korean Campaign was seen by his opposition as an act of selfish cowardice, ignoring the spirit of 'united Japan' that Hideyoshi fought fornote It's still unclear of how the Korean Campaign would turn out if Ieyasu joined the fray, but most historians believed that he wouldn't make a difference and might make things worse for his own men.. The tension accumulated until it reached its climax at Sekigahara, where Ieyasu ultimately won against Ishida Mitsunari with a bit of luck on his side. Thus, he won the land and set up his own dynasty to rule over the land for 200 years or so. He immediately retired after Sekigahara, but continued as advisor for his son (now ruling as shogun) for the next decade, passing away in June 1616.

Tokugawa Ieyasu is perhaps best known for his patience and wisdom in knowing when (and when not) to strike. There is an ironic saying: "Ieyasu won the country by running away".

While Ieyasu did all he could to ensure his legacy would last very long and stabilizing the country, it was also his actions to do so that eventually caused his shogunate's downfall: In order to win Sekigahara, Ieyasu promised those who were loyal to him to be heavily rewarded, and then applied heavy punishment without any deaths towards his defeated opponents; chief amongst these 'losers' were the Western clans: Mōri, Shimazu and Chosokabe. And one of his chief policies after unification of Japan is to close the country from any foreign trades except a few foreign countries, sealing off Japan from outer influences, which worked wonders for Japan's inner growth, but came to bit them in the ass when American fleet under Matthew Perry threatened his descendants to open the borders or else they'll overwhelm Japan with their superior technology. And the Mōri, Shimazu and Chosokabe, unhappy with these changes and still bearing the grudges over their treatment from Ieyasu, decided to strike back, leading to the Meiji Restoration and the end of the Ieyasu's legacy after 200+ years of ruling.

When compared to Oda and Toyotomi, Tokugawa is less commonly a victim of Historical Villain Upgrade. However, he is more likely to be upgraded to villainy in works more sympathetic toward either Sanada Yukimura or Ishida Mitsunari. Said villainous upgrade was actually a fairly common practice around the decline of the Tokugawa shogunate, some 200 years after its founding. Present-day opinion on Tokugawa generally portrays him as an honorable if boring (old) man, far more willing to play the long game and concede small losses than either of his predecessors. Slow and Steady Wins the Race is a common theme among Ieyasu portrayals.

Notable people under the rule of Ieyasu

Ieyasu is mostly independent from Nobunaga's conquest, but there are times their paths collide.