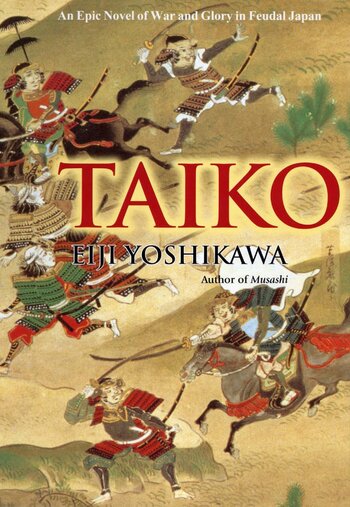 The story of the man who made the bird want to sing.
What if the bird will not sing?
Nobunaga answers, "Kill it!"
Hideyoshi answers, "Make it want to sing."
Ieyasu answers, "Wait."
— A common verse that simplifies these three men's philosophies
Advertisement:

Taiko: An Epic Novel of War and Glory in Feudal Japan (新書太閤記, Shinsho Taikoki) was serialized historical novel by Eiji Yoshikawa (Musashi). Chapters were serialized first in 1939 to 1945 before being compiled into a total of eleven volumes, starting in 1950 to 1951. An abridged English translation by William Scott Wilson was originally published in 1992, combining the whole story into one book.

Sixteenth century Japan was an era of strife. The Ashikaga Shogunate's control on the realm was crumbling, battles between lords were an almost daily occurrence, and the future of the land was a huge question mark. During this turmoil, three young men would rise up and take matters into their own hands: Oda Nobunaga, a hot tempered lord with an eye for battle tactics; Toyotomi Hideyoshi, an affable man with a keen insight into the human heart; and Tokugawa Ieyasu, a stoic hostage whose patience is second only to his intellect.

Taiko tells the story of Hideyoshi and his rise from sandal bearer to Nobunaga's right hand man. Mixing fact with fiction, Yoshikawa follows Hideyoshi from his childhood as a farmer's son up to his successful unification of Japan.