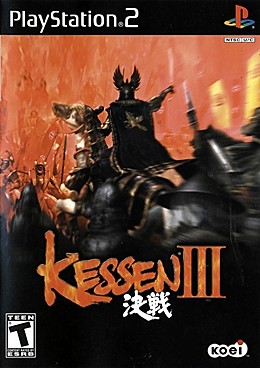 Kessen III is a 2004 game, and the 3rd entry of the Kessen series. It once again took place in Japan's Sengoku Jidai and way further from the first game's Sekigahara setting... in particular during the era of Oda Nobunaga. It takes a little more realistic approach then Kessen II. This game is unique for one thing for its days of release... it completely gives a middle finger to the usual treatment of making Nobunaga a demon or cackling evil bastard and instead made him unashamedly romantic (in the classical sense) and The Hero, tragic and flawed yes, but ultimately a hero. Way to go.

The gameplay follows quite the same as its predecessor. You decide who deploys in what army, and controls your whole army, one at a time (The AI takes care of the other units unless the player intervenes), though you can still issue orders. You can also execute skills that can turn the tide of battle as well.