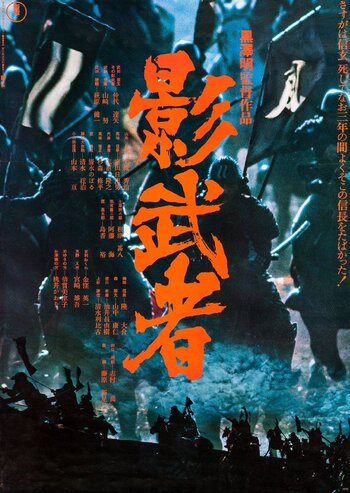 "The shadow of a man can never get up and walk on its own."
Swift as the wind.
Quiet as a forest.
Fierce as fire.
Immovable as a mountain.
— Takeda Shingen's furinkazan banner
Advertisement:

Kagemusha (影武者) is a 1980 Jidaigeki film by Akira Kurosawa. The title (literally "Shadow Warrior" in Japanese) is a term used for an impersonator. It is set in the Sengoku Period and tells the story of a nameless lower-class criminal who is taught to impersonate a dying warlord in order to dissuade opposing lords from attacking the newly vulnerable clan. The warlord whom the kagemusha impersonates is based on daimyo Takeda Shingen, and the film ends with the climactic 1575 Battle of Nagashino.

Akira Kurosawa returns to the samurai film and to a primary theme of his career—the play between illusion and reality. Sumptuously reconstructing the splendor of feudal Japan and the pageantry of war, Kurosawa creates a historical epic that is also a meditation on the nature of power.

Portraying both Takeda Shingen and the kagemusha is Tatsuya Nakadai, prized Japanese theatre actor who has been working with Kurosawa as early as Yojimbo. Tsutomu Yamazaki, another well-known character actor, portrays Takeda Nobukado, Shingen's brother and a former kagemusha of Shingen himself. Daisuke Ryu plays the younger and more ambitious Oda Nobunaga.

Ishir⁠ō Honda directed the 2nd unit and coordinated the production. The production was also internationally aided by George Lucas and Francis Ford Coppola, admirers of the Japanese master. The film was described by Kurosawa as a dress rehearsal for 1985's Ran. It also reunited Nakadai and Ryu as father-and-son Lord Hidetora Ichimonji and Saburo Ichimonji, respectively.