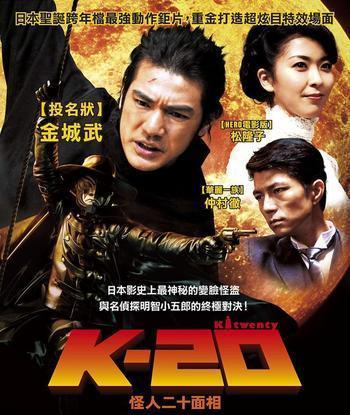 K-20: Kaijin nijû mensô den (English title: K-20: Legend of the Mask) is a 2008 Japanese action film. It is based upon the Sō Kitamura book, Kaijin Nijū Mensō Den, itself based upon the characters from Edogawa Rampo's stories.
Advertisement:

It is 1949 in an Alternate History Japan and the mysterious thief, K-20 searches for a device based on technology created by Nikola Tesla that can transmit electricity anywhere in the world.

Our hero is Heikichi Endo (Takeshi Kaneshiro), a poor circus performer who is framed and arrested for K-20's crimes. Heikichi is broken out of custody by Genji and Kikuko, two ex-criminals who worked with him at the circus. They eventually convince Heikichi to train how to be a thief so he can fight K-20 and stop his plans. In his first direct confrontation with K-20, he stops him interrogating Duchess Yoko Hashiba, heir to the oil magnate who built the Tesla device and she joins their group. Unfortunately, Yoko is engaged to Baron Kogoro Akechi, the famous detective and far as the police are concerned she was kidnapped by Heikichi.