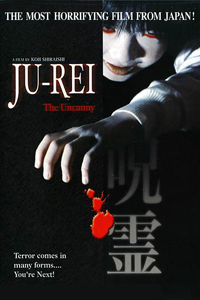 Ju-Rei (called Ju-Rei: The Uncanny on the US DVD, literal translation is "Spirit Curse") is a low-budget Japanese horror movie from director Kôji Shiraishi, better known for his later films Noroi: The Curse and Carved. It's also a completely shameless rip-off of the Ju-on movies. Broken into eleven chapters shown in reverse order, it traces the spread of a ghostly curse through Tokyo. It may be the most obscure J-Horror movie to actually get an American release; it wasn't even released theatrically in its home country.