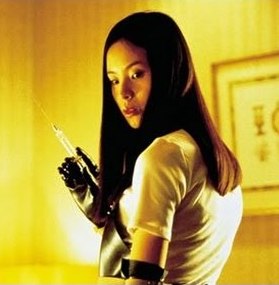 Her most recognizable shot on the internet.
Advertisement:

Eihi Shiina (椎名英姫, born February 3, 1976 in Fukuoka, Japan) is a Japanese fashion model and actress known for her roles in Japanese drama and splatter films. She initially got her big break in 1995 working for Benetton, but gained international recognition as Asami Yamazaki in the Takashi Miike film Audition.