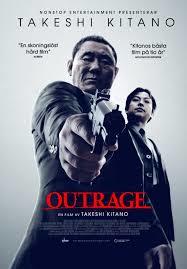 Outrage or アウトレイジ is a 2010 Japanese Yakuza-film by Takeshi Kitano. It is the story about Otomo (Takeshi) and his gang and how they are screwed over by his boss, heading the Ikemoto-gumi, and his boss' boss, the Kaicho (chief of the Kanto region). All begins with Otomo's boss ordering him to bring the Murase-gumi, an opposing gang whose boss is the blood brother of Ikemoto, back in line. What seems an easy job spirals out of control and ends in violence, bloodshed and death.