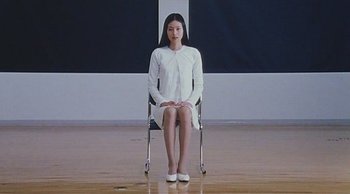 Just a sweet candidate for our hero's love story, nothing more.note This is pretty much the most descriptive image of the film we can show, as every single poster gives a bit too much away.
Advertisement:

Audition is a 1999 Japanese film directed by Takashi Miike. In the years since its release, it's gained equal levels of infamy and respect for both its story and how it goes about presenting it, and it's had a significant influence on later generations of filmmakers, with its ranks of fans including Eli Roth, John Landis and Rob Zombie — which may give some insight to what kind of film this is.

Based on the novel by Ryu Murakami, the story revolves around a lonely widower named Shigeharu Aoyama (Ryo Ishibashi), still mourning the death of his wife, who is encouraged by his friend Yoshikawa and his 17-year-old son Shigehiko to begin dating again.

They set up a mock audition where a lineup of women are interviewed to see if they're most fit for the "part" of Shigeharu's new wife, with the goal that he would marry the most beautiful and charming of the women. After the first round of interviews, he finds himself falling in love with Asami Yamazaki (Eihi Shiina), a beautiful, soft-spoken former ballerina who was forced to quit dancing after an injury.

Oh, one more thing about the film's story — it follows a...unique path into revealing its true nature, and viewers will benefit the most going in knowing as little as possible. As a result, discussing tropes found within this work will essentially spoil the entire film. If you're one of the few who doesn't know how it unfolds, it's strongly advised you watch the movie first, then come back.