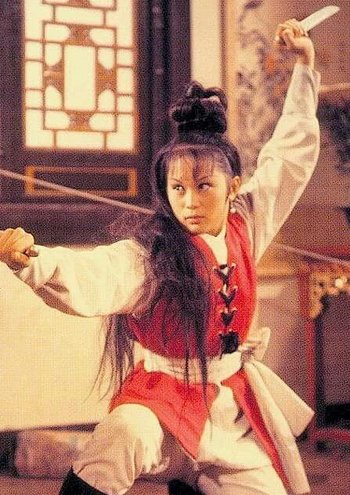 Screenshot from Mask of Vengeance
Advertisement:

A trained ballet dancer since aged 6, Shih received attention from Shaw Brothers during the heyday of their golden age in the 1970s. Then having a successful formula in making martial arts-themed movies, the studios noticed Shih's potential as a star, specifically, the next Cheng Pei-Pei - to the extent of casting Shih as Cheng's protégé and sidekick in their martial arts classic, The Lady Hermit. Shih proves herself to be a capable star on her own right, even when alongside megastars such as Cheng Pei-Pei or Lo Lieh, and would later star in multiple period pieces and action films for the studios.

Late into the 70s, however, Shih's star power began to diminish and she finds herself being cast in increasingly smaller roles as supporting characters, at which point she terminated her contract with Shaw Brothers in 1980 (her final film with them being A Deadly Secret) before returning to Taiwan.