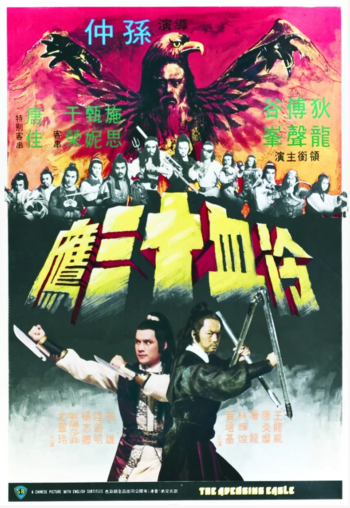 In the warring clans of ancient China, Chik Ming-hsing (Ti Lung) is a man on the run, having escaped the former clan he was raised in, the dreaded Iron Boat Clan whose legion of assassins, called the Thirteen Eagles, he was a member of. His former colleagues and partners are unwilling to let him go, and now Ming is a wanted fugitive by the other twelve Eagle Assassins. But along the way, Ming encounters Cheuk (Alexander Fu Sheng), a wandering warrior who is travelling all across China to personally destroy the Eagle Assasins, because these assassins massacred his family of in-laws while he's on journeys of his own. Namely, his personal vendetta is against the Eagle who killed his pregnant wife.

After a brief fight between the two - Cheuk trying to kill Ming because of Ming's connections with the Eagles, both men comes to a conclusion that they will work together to overthrow their common enemy - Master Hung, the ruthless leader of the Eagle Assassins.

This film was remade in 1993, titled The 13 Cold-Blooded Eagles. There are news reports from The Weinstein Company of a modern Hollywood remake of this film, but so far nothing has come into fruition.