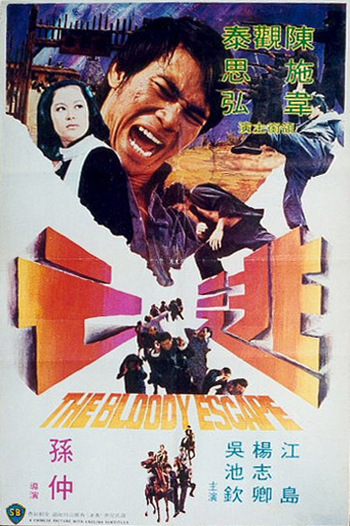 The Bloody Escape is a 1975 Shaw Brothers action-drama directed by Chang Cheh and Sun Chung, starring Chen Kuan-tai, who at this point of his career had started becoming one of Chang Cheh's favourites, and also Shih Szu in a rare non-action role.

The Wolf Head Gang is a bandit clan who had a rule against killing, one enforced by their chieftain. Gu Hui (Chen) is one of the clan's best fighters, who was raised among the bandits as a baby and grew up to be a powerful enforcer who follows the non-killing rule to the heart. But when the old chief dies, the new Chief, Du Jian Qiang, decide to order a change in management, forsaking the old rules on his very first day as chief by ordering a massacre of a merchant caravan and kidnapping a young woman, Tang Li (Shih Szu) as a hostage.

When Gu Hui realized his former clan had become completely evil, he decide to leave, saving Tang Li in the process, and attempt to escape from the bandit clan, but Chief Du isn't willing to let anyone go easily. Making matters worse is the involvement of a local police chief, Commissioner Chang Chin (Wang Wai) who happens to be Tang Li's boyfriend, and had mistaken Gu Hui for being the bandit responsible for his girlfriend's abduction.

The Bloody Escape contains examples of: