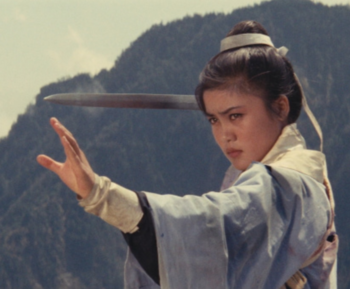 Screenshot from Dragon Gate Inn, and also 90 percent of Polly's films from the 70s.
Advertisement:

Polly Ling-Feng Shang-Kuan (born 上官灵凤, October 10, 1949 in Pin-Tong, Taiwan) is a Taiwanese actress, stuntwoman and one of the leading female kung fu stars of Taiwanese cinema in the 1960s and 1970s.

Often considered the yin to fellow Taiwanese action star Angela Mao's yang, Polly's off-the-wall adorable personality and diminutive stature in her movie roles often surprises audiences when she gets to shine her her abilities in kicking ass. Having a black belt in karate, judo, and taekwondo, and a highly prolific actress well sought after in the industry, Polly have since starred in 50 movies, mostly of the Wuxia genre, from her native Taiwan, in 14 years (1967-1981). It's notable that her role in Back Alley Princess (1973) earns her the Best Actress Award during The 11th Golden Horse Awards.

After leaving the film industry in the 1980s, Polly have since changed her career to becoming a coach in Taekwondo.

She also runs a Chinese restaurant, the Dongpo Kitchen (眉州东坡) in Southern California, where she resides.