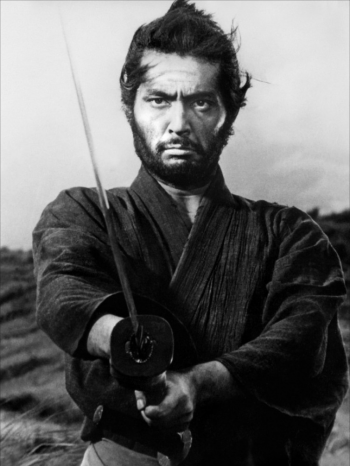 Tatsuya Nakadai in Harakiri
Tatsuya Nakadai (born December 13, 1932 in Tokyo, Japan) is a legendary Japanese actor, and one of the most recognizable to Western audiences. He is known for playing a diverse range of roles, performing in drama, action and comedy films, theatre, television (and even anime) as a leading man and background character.
Advertisement:

He was famously discovered by the then still im-prominent director Masaki Kobayashi, who chanced upon him while he was working as a shop clerk. Kobayashi offered him a role in The Thick-Walled Roomnote Kabe atsuki heya which would be Tatsuya's film debut. It wasn't until Kobayashi's epic The Human Condition, however, that Tatsuya became a star - where his ability to play an internally tormented character awed Japanese audiences and directors alike.

Tatsuya is extremely prolific, having worked on films from the 1950s and still acting today. He is well known for playing Samurai and antagonists, especially with frequent collaborator Toshiro Mifune (an equally legendary Japanese actor).