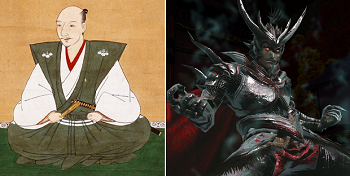 Some people just don't understand "sarcasm" when they hear that "dairokuten-maou" term. Well, it can't be helped.
"Worship me. Die for your crime of defying the House of One Hundred Demons, and repent in the afterlife. There are none before me, and will be none after me. I am the Demon King of the Sixth Heaven, Oda Nobunaga!"
— Nobunaga, Sengoku Basara anime, "Episode 1"
Advertisement:

According to the Jesuit Father Luís Fróis,

Oda Nobunaga called himself "Demon King of the Sixth Heaven" (dairokuten-maō), a title properly belonging to Māra, the Buddhist counterpart of Satan (though portrayed in mythology as a Noble Demon). While Nobunaga was most likely being sarcastic (he was actually very eccentric for people in his age, so in his mind he was just making a bombastic but untrue boast to prep up his fearsomeness to his foes), and in any case he's not the only daimyō of the Sengoku Jidai whose ruthlessness has inspired a Historical Villain Upgrade, many popular depictions of Nobunaga literally demonize him, or at least give him supernatural powers.

The biggest inspiration of this usually comes from one of Nobunaga's biggest Shoot the Dog (or most commonly believed as a kick) moment: the burning of Mt. Hiei, taking out the Buddhist warrior-monks of Ikko-Ikki and leaving none alive, including women and children. Whoever had the higher moral ground was unclear at that point (whether Nobunaga was just being callous, or the monks themselves were really disruptive and just adding on chaos in Japan that needed to be quelled no matter what, even if they used religion as a way to excuse their behavior), but considering Buddhism eventually recovered and once again became one of the major religions in Japan, Nobunaga's actions towards those Buddhists were not going to win him many fans from the future Buddhist storytellers, so they tend to use his previous sarcasm and make it a literal statement. And in addition to his more accepting stance with Christian missionaries, being considered 'barbaric foreigners with foreign religion' (more below), Nobunaga himself has been said to be rather disrespecting towards Buddhism in general, so that's even more reason to make him a devil figure by the Buddhist majority.

This is also not helped with Nobunaga's attitude during his time, while he was ruthless, there may be other factors on how Nobunaga was singled out to be the Demon King candidate instead of any other ruthless daimyos out there. In those times, traditional and old fashioned honor was especially revered. Nobunaga mostly threw a middle finger on those, as he collaborated with 'barbarous' foreigners to bolster his forces (and also wore European clothes a lot), promoted meritocracy instead of judging people based on their status (which was the norm back then) and several of his enemies that were mostly traditionalist eventually got trounced by him.note The Azai clan turned against him despite being linked through marriage due to their older alliance with Asakura, which Nobunaga attacked. Additionally, Nobunaga's usage of muskets obliterated the Takeda clan, often thought as the last of the mighty traditional clans thanks to their Takeda Cavalry, in Nagashino. These days, Nobunaga's actions might have been thought to be a stroke of genius, but in the days past, this was considered rather blasphemous and extremely dangerous, such that people thought only demons would think of this kind of trouncing of what was good in their eyes. And considering that even in modern Japan, traditions are well preserved and those who do not try to blend in with others and try to stick out often get ostracized, it's more than likely that Nobunaga would be seen as a violator of Japanese ways, making him perfect to be referred as an evil, tradition-wrecker demon (even if those who values individuality would see Nobunaga as a genius instead).

To summarize: Because history is so often Written by the Winners, he ended up being literally demonized when the adherents of the very cultural and religious traditions that Nobunaga opposed so vigorously ended up being the ones controlling the narrative.

In the old days, this trope was used for a more common Black-and-White Morality, since Nobunaga's brutality was perfect to play the role of villain. As time passed, however, values started to shift and people learned about the grayness of war, that the Buddhists that relegated the role to Nobunaga might not have the absolute moral high ground. Because of this, the trope started to evolve. Rather than playing the Demon King factor of Nobunaga totally straight, there are also works that use the Noble Demon or Dark Is Not Evil treatment for our resident Japanese Demon King; just because Nobunaga has demonic traits or can be rather brutal doesn't mean that he always had to play the cackling Saturday morning cartoon villain.

A Sub-Trope of Devil Complex, Historical Domain Superperson and Historical Villain Upgrade. Compare Beethoven Was an Alien Spy, We Didn't Start the Führer and Dracula (as Vlad Tepes); another East Asian example is Cao Cao's transformation from his historical persona to stock Card-Carrying Villain in Peking Opera (though not to an extent of being a demon).