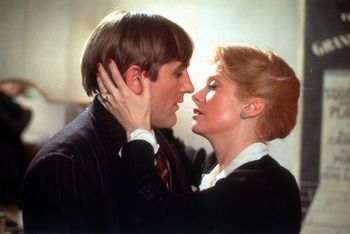 The Last Metro is a 1980 film by François Truffaut, starring Catherine Deneuve and Gérard Depardieu.

Occupied France, late 1942. Marion Steiner (Deneuve) is an actress and the owner of a Paris playhouse, the Théâtre Montmartre. A few months prior Marion took over the theater after her Jewish husband Lucas fled Vichy France, presumably for Spain. Marion is staging a new play that her husband wrote shortly before he disappeared, one which she needs to be successful or the theater will go under. She has recently hired as the male lead in the play one Bernard Granger (Depardieu), an affable man who is a veteran of the Grand Guignol theater.

Marion and Bernard both have secrets. Marion is the only person who knows that her husband Lucas did not flee France, but has been hiding ever since his disappearance in the basement of the theater. And neither Marion nor anyone else in the theater troupe knows that when Bernard isn't acting in a play, he's working for the French Resistance.