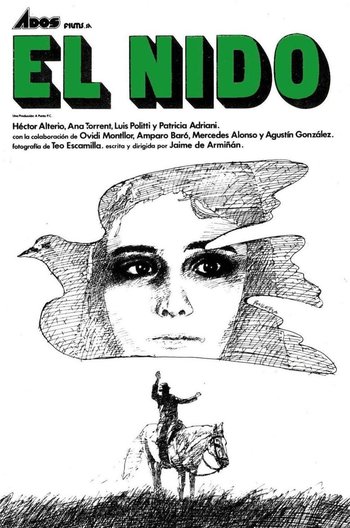 The Nest (El Nido) is a 1980 film from Spain, directed by Jaime de Armiñán.

Alejandro is a 60-year-old widower, a man of means who is living in comfortable but dull retirement in a ranch house in the country. One day he's out riding his horse in the forest, because that's the kind of thing he does to kill time, when a bird's egg hits him square on the head.

The bird's egg winds up drawing his attention to a piece of paper on a tree, with the feather of a bird, directing him to find the next sign with the feather of a different bird. The pinned signs eventually lead him to the local high school, where the drama club is putting on a performance of Macbeth. The girl playing Lady Macbeth, one Goyita (Ana Torrent) is the person who left the signs.

The 13-year-old Goyita, wise beyond her years, starts spending a lot of time with the man old enough to be her grandfather. At first it's mostly innocent, as the two go bird-watching and play leapfrog. However, while they never actually consummate their relationship, it steadily grows more intense and emotional. Goyita, who's clearly the one in charge, starts making greater and greater demands of Alejandro, tests of his love. Eventually she asks him to kill someone. That someone happens to be a police sergeant.