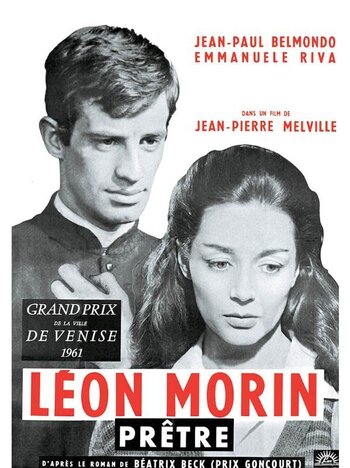 Barny (Emmanuelle Riva) is a widow living with her young daughter France amidst World War II, in an unnamed village somewhere in Italian-occupied France (so, the southeastern corner of the country). The time under Italian occupation is not that onerous, as no one takes the comic-opera Italians very seriously. When the Germans arrive, however (this dates the beginning of the film to November 1942

But that's not strictly what the movie is about. Around the time the Germans enter the village, Barny meets a young priest, Léon Morin (Jean-Paul Belmondo). Barny, a communist and an atheist, taunts Morin by greeting him with "Religion is the opiate of the masses!" in the confessional booth. To her surprise, the young priest receives this troll in a friendly, understanding manner. Barny and Léon strike up a friendship that mostly involves earnest intellectual discussions in which she pits her atheism against his gentle, liberal version of Catholicism. Barny soon starts to develop feelings for the handsome young priest, feelings that Léon very subtly encourages. And soon, all of good-looking Barny's attractive young female friends are getting spiritual counseling from the handsome priest.