Film / The Legend of Frenchie King 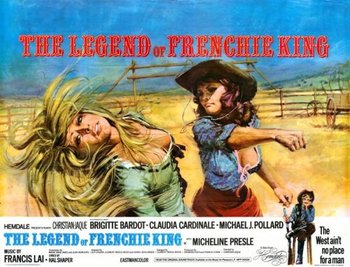 Louise Leroi (Bardot) and her sisters are famous bandits who, while robbing a train, find the deed to a ranch. When the train arrives in the French-speaking community of Bougival Junction, Maria Sarrazin (Cardinale) and her brothers find the map of the ranch in what's left of the train's loot, and discover that there's oil in the ranch. The Lerois move to Bougival Junction with Louise under the guise of Dr. Miller, who's the true owner of the ranch, and start a cold war with the Sarrazins over the property, and things become mildly complicated when the respective sisters and brothers fall for each other. A bumbling sheriff who can't speak French is caught in the middle of all this.