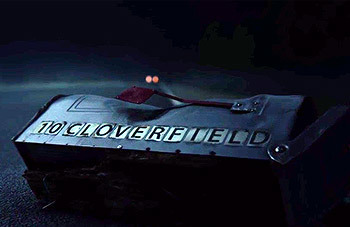 The Title Drop in fictional works occurs when the title of a work is spoken as a line of dialogue, usually to emphasize a theme of the work or to draw attention to something as important.

However, the title of the work isn't always spoken out loud. The title may be represented visually, in a particular shot composition or by placing a particular object in the frame. This is most often used in the same way, to draw attention to something important or to emphasize a theme.