Film / Knife in the Water 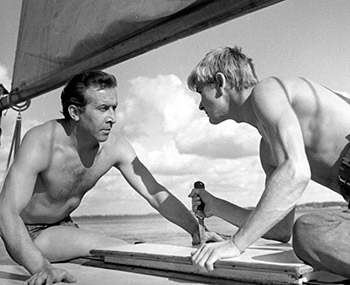 Knife in the Water (original foreign title: Nóż w wodzie) is a Polish film from 1962. It was the feature-film debut of Roman Polański.

Andrzej and Krystyna, a middle-aged man and his young wife, are driving to a lake to go sailing. On the way, they pick up a young man who is hitchhiking. Andrzej and Krystyna let the young man come on the boat with them. Tensions gradually rise as the three of them sail the lake.

Knife in the Water was the first Polish film ever to be nominated for Best Foreign Language Film at the Academy Awards (it lost to 8½). It established Roman Polanski as a rising star. It was the only feature Polanski made in his native Poland before emigrating to France.

It is the only Polanski film to be rated G by the MPAA.