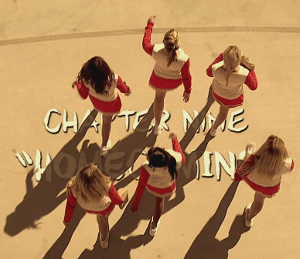 Not really painted on the ground, but it sure looks like it.
Advertisement:

In the early days of TV, the best way to display text to your viewers was to put a physical card in front of the camera with that text on it, hence the name Episode Title Card. Advances in production meant that text could later be edited directly into the film rather than having a physical card, and further advances meant that you could even display the text on-screen over of a normal scene (an "overlay"). The overlay text will act like it's stuck to the screen, though; it won't move on the screen, even if the camera angle changes.

Nowadays the latest technology can let you make it seem like overlay text is physically in the scene again. It can look like it's written on a highway overpass, or floating on the surface of the water. It is perspective-corrected to seem as if it's in the scene, will move when the camera (or the object it's written on) moves, and might even be lit as if it were in the scene. However, characters do not notice or acknowledge it, and the audience is expected to understand that the text doesn't actually exist in the scene and that it's just a novel way of displaying it. This can also be done with a Title In or any other text presented to the audience.

Compare Pop-Up Texting for text messages and other text otherwise unseen by the audience.