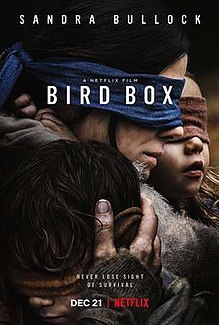 Bird Box is a film adaptation of the book with the same name written by Josh Malerman, directed by Susanne Bier and released in 2018 as a Netflix original. The film stars Sandra Bullock as the main character, Malorie, as an invasion of bizarre creatures, whose mere appearance causes people to commit suicide, appear rampant on Earth. Malorie, with her two children, must flee down a river while blindfolded to find safe haven. The story alternates between the beginning of the disaster and Malorie's initial days of survival, and the present journey of Malorie and the children.