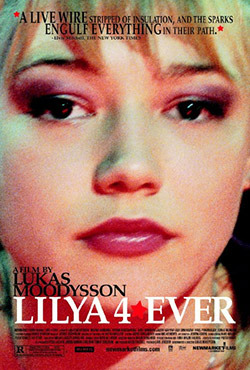 Lilja 4-ever is a 2002 Swedish-Danish drama film directed by Lukas Moodysson.

Lilya (Oksana Akinshina) is a 16-year-old girl living in the slums of the former Soviet Union. As the film opens, she is trying to make the most out of her poverty-stricken life, but is really looking forward to moving to America with her mother.

Eventually, her mother leaves for America but is only planning on going alone, leaving Lilya to fend for herself, ultimately goaded by her abusive aunt to turn to a life of prostitution only slightly remedied by squatting in a flat with a local boy named Volodya who serves as her only friend.

However, she gets a boyfriend named Andrei, who offers her a passport and a new life in Sweden, and it only goes downhill from there.

Did we also mention this was Very Loosely Based on a True Story?