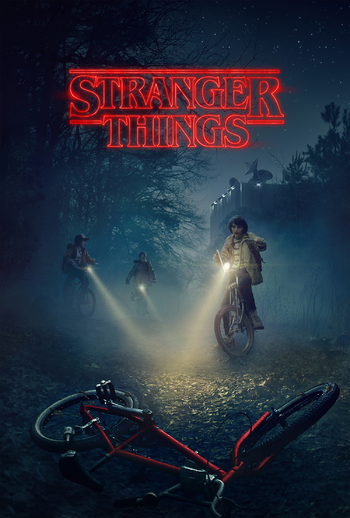 ♫ And if I only could, I'd make a deal with God
And I'd get Him to swap our places
Be running up that road
Be running up that hill
Be running up that building ♫
El: What is "friend"?
Lucas: A friend is...
Mike: A friend is someone you'd do anything for.
Dustin: You lend them your cool stuff, like comic books and trading cards.
Mike: And they never break a promise.
— "Chapter Two: The Weirdo on Maple Street"
Advertisement:

Taking place in the fictional town of Hawkins, Indiana in The '80s, the series tells the story of the disappearance of Will Byers (Noah Schnapp), the investigation into said disappearance and an attempted rescue mission by his friends, and the supernatural events surrounding the town itself. Along the way, the kids and teenagers of the town affected by Will's disappearance have to adjust to the hardships that come with growing up, while the adults have to confront their worst fears.

The show takes great influence from 1980s horror, sci-fi and coming-of-age stories, more specifically the works of Stephen King and John Carpenter alongside Amblin Entertainment movies such as E.T. the Extra-Terrestrial, Poltergeist, and The Goonies. In designing the series, the Duffer Brothers aimed to incorporate all three genres (alongside the investigative drama) and the pop culture of the decade.

, although spin-off projects after the completion of the final season are in development, including

a new live-action series and a stage play to be directed by Stephen Daldry.

The series has led to a franchise, with an ever-growing number of media including tie-in novels, comics and video games.