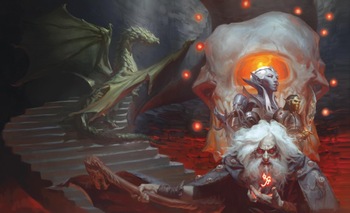 The greatest dungeon of them all.
Advertisement:

Waterdeep: Dungeon of the Mad Mage is an adventure module for the fifth edition of Dungeons & Dragons, released on November 20, 2018. It is the Immediate Sequel to Waterdeep: Dragon Heist, with Christopher Perkins serving as the lead designer of the module.

Taking place within the city of Waterdeep, the adventure centers on the exploration of Undermountain, the largest and most famous dungeon complex in the Forgotten Realms. As such, adventurers from all across Toril are drawn into the dungeon through its entrance within the Yawning Portal inn, hoping to return to the surface with riches and harrowing tales of bravery and danger. But through the depths of this labyrinthine dungeon, dark forces lie waiting at every corner to put the adventurers' mettle to the test. Among which is none other than Halaster Blackcloak, the titular Mad Mage, who reigns over Undermountain from his lair within the deepest reaches of the dungeon. Spanning across twenty-three levels, with each one deeper than the last, only the bravest, luckiest, and most resourceful of adventurers would dare to challenge the dangers of Undermountain and live to tell the tale.

DISCLAIMER: The Mad Mage of Undermountain is not seeing visitors right now. Don't come down because, uh, we're renovating and everything is a mess. You won't find any treasure, and the buffet is closed until further notice. Ye gods, where did all these githyanki come from? As if the mind flayers weren't bad enough. What's that? You think you can plunder my home and get away with it? Ha! You don't have the experience points.