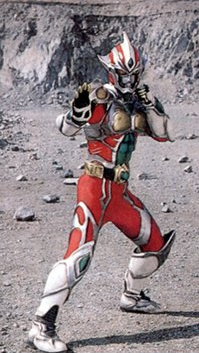 A tokusatsu series produced by Toho and Capcom that aired in 1996, combining several elements from other series including Kamen Rider, Guyver, Fist of the North Star, and Street Fighter.

Guyferd tells the story of Gou Kazama, a martial artist who comes back to Japan after traveling the world to find his missing brother Masato. He is soon captured by the evil organization Crown and is changed into the Guyferd, a combination of cybenetic implants and an alien parasite, giving him new found power. Gou is aided by Doctor Yakeo Shiroishi, fellow martial artist and rich girl Rei Kujou and her little brother and hacker Yuu. Gou uses his fighting skills to fight Crown and their legion of cyborgs and mutants, protect his friends, and search for Masato while attempting to control the Guyferd power.

Though it borrows heavily from other toku series before it, what makes Guyferd stand out are its use of martial arts and well done choreography, making for a very unique Fighting Series.

Not to be confused with Galford.