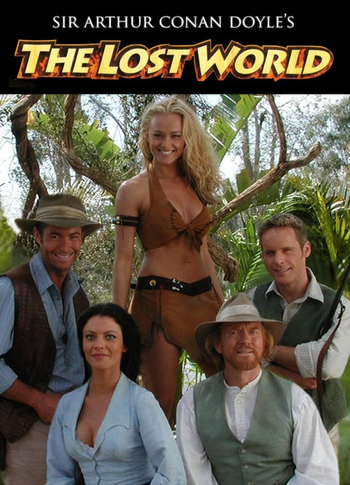 At the dawn of the 20th century, a band of adventurers, led by adventurer and scholar Professor Edward Challenger, embark on an expedition to prove the existence of a lost world isolated from the rest of the modern world. The British expedition team consisting of a mismatched group of enthusiasts, all with less than selfless reasons for making the journey begin their trip under less than ideal conditions. The intrepid band consists of:

During their expedition, their hot air balloon crashes in the uncharted Amazon jungle, where they end up on the prehistoric 'Plateau'. The group then meets up with Veronica Layton (Jennifer O'Dell) whose parents had disappeared on another expedition eleven years before. The group (later joined by a woman named Finn, near the end of the third season) must find their way to civilization through the various pre- (and, in some cases, post-) historic landscapes and civilizations that have been preserved on the Plateau.

Not to be confused with The Lost World (2001), the miniseries based on the same book, which more directly adapts the book rather than taking the premise and characters to make a long running series.